Maddie and the King of Paradise

i2i Publishing > Maddie and the King of Paradise 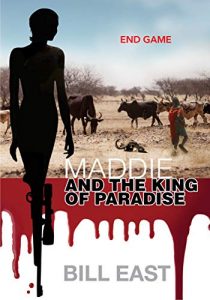 Well, after a rather cold and wet end to November, the Summer seems to have finally arrived in Sydney!

The sun is shining, the birds are singing and all’s well with the world….well up to a point!

My book ‘Maddie and the King of Paradise’ has just been published and I’m hopeful that lots of people will buy it and everybody will enjoy it.

In this, the sequel to ‘Maddie Trinco’ and the last in the trilogy which began with ‘The Arbutus’, Maddie ‘graduates’ to becoming a fully fledged assassin.

Gone are the days of retribution for evil ‘nobodies’. Maddie’s targets have become National and International figures whom she deems have brought misery and destruction to those under their control.

The climactic end to the novel concerns Maddie’s last target, an African Dictator. Her project is successful albeit with surprising and disastrous consequences.

Hope you like the book!….it’s a ’stand alone’ story but maybe you should read ‘The Arbutus’ and ‘Maddie Trinco’ first. It’ll give you a bit of background and you just might fall in love with Maddie!

As a new author, I had many offers from different publishers for my book LIFE ON A KNIFE EDGE. I was delighted with my choice to go ahead with i2i publishing, as from the outset Mr Lionel Ross and later his senior editor Mr Mark Cripps made my journey personal. There were many events in my story that had made me go back and visit different areas of my trauma, again Mr Ross and Mr Cripps gave me the time that I needed to continue with telling my story keeping me and the well being of my family as their NUMBER ONE priority.  I thank them both for going the extra mile and eventually producing what I have been told many times by readers that LIFE ON A KNIFE EDGE is one of the best books that they have ever read.

Sebastian J. Handley - Author of Brexit: How the Nobodies Beat the Somebodies

I have been deeply impressed by i2i Publishing. Lionel Ross was always extremely helpful and supportive and the whole team produced my book ‘Brexit: the road to freedom’ with great professionalism. My most sincere thanks to all involved.

A huge thank you to Lionel and his wonderful team at i2i publishing for all their hard working getting my book, The Self Improver, to print. Special thanks also to Mark Cripps, the senior editor. Without i2i I would never have managed to get my book published. I can’t wait to work with these wonderful professionals again when my next book is finished. I also love the new website. Thank you guys, I can’t recommend you highly enough.